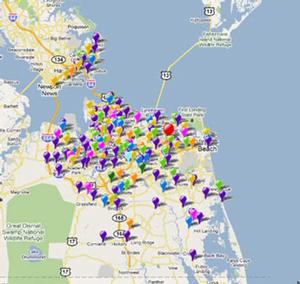 The Presbytery of Eastern Virginia (PEVA) counts 63 churches within its boundaries, which extend from Williamsburg and James City County to the northwest to Virginia Beach to the southeast, including Virginia's Eastern Shore.  The Presbytery office is located at 801 Loudoun Ave., Portsmouth, VA 23707-3216

PEVA has as its vision "Healthy, Growing Congregations Working Together."

Pictures of the 2010 Prayer Breakfast

Some 65 men representing churches through the Presbytery of Eastern Virginia, gathers at Bayside Presbyterian on Saturday, March 13 for the semi-annual Presbytery Men's Breakfast.  The program featured breakfast, Key Note speaker The Rev. John Groth, and a communion service.

Speaking to a group made up of former military officers and men, Rev. Groth spoke about what the military could teach the church.  He noted that the military was good at a number of things, including recruitment, basic training, technical job training, continued training and education, teamwork and helping the wounded.  He indicated that all these areas applied to the church, but the church was not doing a good job using them.

The military does a better job of recruiting men than the churches do, according to Groth.  He also indicated that churches lack the basic training for new member and the technical training to place them members in positions of leadership.  Continued nurture and working as teams were areas that could be improved in the church, Groth reported.  Finally, Groth indicated that while the military takes good care of their wounded, the church leaves many on the battlefield.  He encouraged all men to take up leadership role in evangelizing, nurturing, and teaching others now to join in the fight to bring the world to Jesus.

Rev. John Groth is a retired Air Force Chaplin who now is the regional director of New Jersey and Delaware for Priority One Foundation, a ministry to men and their families.  Groth served in the Air Force for 21 years reaching the rank of Lt. Colonel.  He spent 11 years leading a Chaplin Team at the Department of Defense's Port Mortuary, Dover AFB.  He made made numerous trips to Iraq and the middle east bringing comfort to the families of men who had given their lives in Operation Enduring Freedom and Iraqi Freedom.